Reacting to the Unexpected 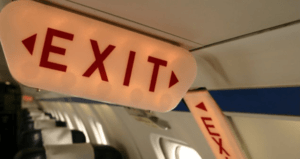 A few months ago I was flying UA5559 from Chicago to Calgary.

United diverted us to Williston, ND, and stranded us there for hours.

I’d like to say thanks to everyone at United for the diversion.

First, I want to be clear. The diversion was uncomfortable, inconvenient and turned a 3-hour 50-minute flight into a day-long ordeal.

The important point is United’s people did everything they should that day.
Thanks.

A passenger was in distress – they performed emergency 1st aid and diverted to the nearest appropriate airport. Paramedics met the plane on the tarmac and carried the man off. The flight crew did what they said in that flight safety briefing. They focused on the passenger in distress.

Most of an oxygen bottle was consumed assisting the passenger. We didn’t have enough oxygen to fly legally.
We were stuck in Williston.

It seems so simple, just get another oxygen bottle. I fill my bottle up at FBOs all the time. Think through all the procedural practices, safety rules and certification requirements for commercial flights. We were going to wait until United could dispatch another plane.

Far sooner than I expected, United arranged for one of Williston’s few gates to be used.  We were de-planned, the vending machines were opened up, and United ordered pizza, treats,  bottled water & soda. The gate staff worked well past when they typically go home. Pleasant and cheerfully answering the same question, that they had no answer for: when would our journey restart.

I made an educated guess about the time necessary to pull a crew together, get another commuter jet, get airborne – estimated flight time from a few hubs to Williston. Even expeditious work takes time. Best case, worst case, and the case I believed most probable. A few minutes before the middle estimate we were told the replacement plane was on final.

When we got to Calgary, United offered further compensation for our inconvenience. I have thought several times about the irony of United proposing to compensate me for their doing the right thing. Offering with aplomb.

All I can say is thanks. I’d rather not be diverted and stuck in a small town airport.  As a very regular traveler, it is nice to see a passenger in distress being the priority and, once the passenger was taken care of, the rest of United’s people working to minimize the impact.

Ready to find out more?

Drop us a line today for a free quote!

When linking to agile software development, the same question is asked, what they should the team assist in answering. Some of the alignment is driven by what the enterprise architecture team is designed to support.

Next call out heading

Ready to find out more?

Drop us a line today for a free quote!

Any cookies that may not be particularly necessary for the website to function and is used specifically to collect user personal data via analytics, ads, other embedded contents are termed as non-necessary cookies. It is mandatory to procure user consent prior to running these cookies on your website.

SAVE & ACCEPT
Scroll to Top